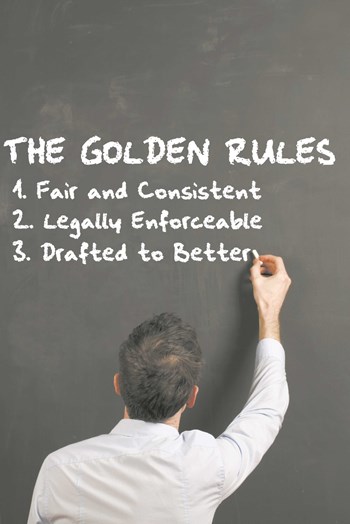 Nothing stays the same forever. As community standards, attitudes and  populations shift and evolve, rules and regulations that once made sense or  that reflected the views and standards of their day can become antiquated,  irrelevant, or just plain silly. Those changes often necessitate the amendment  of existing ones—or the drafting of new ones—to fit the new paradigm.

“Criteria that a board should use when considering a new rule include its  fairness to the entire membership, its enforceability, and its ability to serve  a purpose that will better the community,” says Judi Allen, district manager at KW Property Management & Consulting in Clearwater.

Since the oldest community associations in Florida were created in the late 1950’s, you won’t find archaic rules that you might see in other states (such as not allowing  residents to tether their horse carriages to the railing out front in certain  New York City co-ops, for example), but that doesn’t mean that all rules are completely up to date.

There are plenty of associations that have now-defunct satellite dish  restrictions and age restrictions on their books that are no longer enforceable  and should be removed to avoid both confusion and claims of discrimination or  illegality.

“The first thing a community has to consider is whether the restriction legally  has to be in the declaration to be enforceable and that’s fairly complicated,” says Kenneth Direktor, an attorney with Becker & Poliakoff in West Palm Beach. “A declaration by condominiums and HOAs is not required to be 'reasonable'—they simply can’t be contrary to the law. Rules and regulations have to be reasonable.”

It’s important that HOA administrators understand the parameters in drafting fair,  enforceable, legally sound rules, and how to properly change or repeal outmoded  rules and regulations that no longer make sense for their community.

“We cover this territory very thoroughly in our Board Member Boot Camp, which is  a state-approved course designed to certify Florida’s board members for service to their communities,” says Donna DiMaggio Berger, a managing partner with the community association  law firm of Katzman Garfinkel & Berger in Fort Lauderdale. “Bill and Susan Raphan, who were formerly with the Florida Condominium Ombudsman’s Office, are now Statewide Education Facilitators, and teach series of courses  for directors and managers around the state. Passing proper rules is one of  them.”

Bylaws and rules should reflect the values and expectations of the building;  they should make sense, and be kept up-to-date.

“Boards should only make changes to rules when it contributes to the quality of  life for the entire community,” Allen says. “Don’t make a rule change that is intended to be punitive. You need to ensure that  the rule is fair, enforceable, and reasonable to implement.”

A sound, enforceable rule is one that is rational, and based on the goal of  protecting the rights of all community residents. In addition, one must think  clearly about the methods and procedures for enforcing a rule or policy.  Without a system of enforcement, the policy or rule is useless.

“Boards need to have a clear understanding of what they are trying to accomplish  and what behavior they are trying to regulate,” Direktor says. “They need to ask themselves if they are prepared to enforce it. If not, don’t add it. If you aren’t going to enforce a rule once you are confronted with a violation, it doesn’t belong in rules in the first place.”

A Time for Change

Boards considering rule changes should consult their association attorney if  they are not certain that they have authority to pass such rules and if they  are not certain how to word the rules to ensure that they are reasonable.

“Sometimes the restriction is tied to a monetary component and other times it is  not,” Berger says. “If there are no restrictions requiring boards to obtain membership approval to  adopt rules, then a majority of the board can vote to do so.”

The process to change rules is dependent on what the community’s documents provide. Some documents require membership approval before boards  can pass certain rules or, in the most rare circumstances, any rules.

“In order to change a rule, the board of directors must convey the intended  changes in writing, and mail a copy to the membership. A strong board will also  have the rules mailed to any tenants who may be in the community rather than  relying on an owner to share the rules changes with their tenant(s),” Allen says. “If the change to the rules will impact any of the other governing documents of  the association that will require a vote.”

A board contemplating a change or addition to their community's rules must first  confirm that it has the authority to do so under their own governing documents.  The authority of some boards is constrained by the governing documents, while  others may enjoy a very wide berth when it comes to passing rules and  regulations.

“Once the board confirms that it can adopt rules, either with or without  membership approval, it must identify the problem or issue it is trying to  address and then adopt a rule that is the most reasonable way of handling the  problem or issue,” Berger says. “Rules cannot conflict with provisions in the governing documents, nor can they  be discriminatory in intent or application. Rules cannot create new  restrictions where the governing documents are silent on the issue.”

According to the pros, two rule changes that pop up quite a bit concern pets and  smoking. Both are hot issues, and many times boards try to write rules about  these items without following what their governing documents say.

“A classic example of this is a board attempting to pass a no pet rule or a no  leasing rule when the governing documents are silent on those issues,” Berger says. “The absence of such restrictions in the governing documents has been interpreted  by the courts as an implied right and any attempt to alter those rights would  have to be done via an amendment to the documents rather than via board rule  alone.”

Other common rules concern what people are expected to do if they plan to be  away from their condo during hurricane season. These rules deal with closing  shutters, keeping their air conditioners set at a certain temperature, or  turning off their water.

One thing to keep in mind is that a rule will not be deemed reasonable if it has  a disproportionate impact on just a few of the community’s residents.

For example, some boards have passed a “no diapers in the pool” rule in a thinly-veiled attempt to discourage families with young children from  using the community pool. Others have tried to pass rules limiting children’s use of the pool to the hours between 10 a.m. and 3 p.m.—when all but the smallest kids are usually in school.

“Any changes to rules that impact unit use in a condominium must be preceded by  14-day advance notice to the membership so that they may attend such board  meeting and listen to the dialogue on the reasons the board is contemplating  such a rule change,” Berger says. “Some boards neglect to give the proper notice for such a board meeting.”

Boards would also be well advised to gather membership input from its residents  before passing a rule. This doesn’t mean that the board must get their approval (unless the governing documents  requires it, as discussed above) but it does mean that an elected board should  be sensitive to the membership’s desires.

“Does the membership really see the need for and support an open beverage rule at  the pool?” asks Berger. “If a board passes a series of rules that the membership sees as unnecessary or  overly burdensome, it might very well cut those directors’ service on the board short.”

The biggest mistake that boards make is that once created, they generally tend  to fail to enforce it or only enforce it selectively.

“There’s a certain dynamic in place when people sit down to write rules. People come up  with ideas and in the context these ideas seem great and you wind up with 20  pages of rules,” Direktor says. “At the end of the day, they may reflect some tremendous creativity but many  cases have no relationship to the reality of what the community is prepared to  enforce or live by.”

Also, don’t regulate just for the sake of regulating. If you are going to adopt a rule,  use plain English and clearly state what behavior is prohibited.

“If you are going to enforce it, draft it that way,” Direktor says. “A lot of rules drafted tend not to say what they really mean—using legalese incorrectly—and you don’t want to find out it was not drafted correctly after it’s violated and adopted. By speaking with counsel, you can get the benefit of how  these rules are drafted and how they have fared when challenged.”

If a board of directors is considering amending or adding to their rules and  regulations, then they should seek input from their property management company  to determine if the change is feasible, what the emotional reaction may be from  the membership and whether their association attorney should be involved.