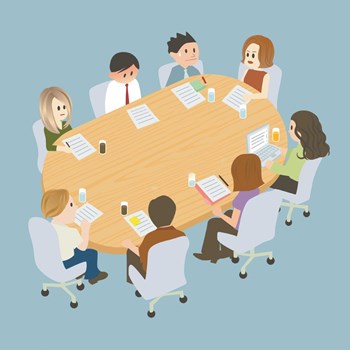 Read any of the major business publications or websites and you’re bound to find articles on the importance of delegating. It’s one of the most fundamental skills for a successful business owner to have. A  simple Internet search finds scores of tips for CEOs and smaller entrepreneurs  alike on how to delegate more effectively. Running an association isn’t quite like running a Fortune 500 company, but the concept of delegating tasks  works just as well with a board of directors for a homeowners association as it  does for a titan of industry or finance.

Boards of directors are small teams of volunteers with a lot of work to do. They  often need help and that’s where delegating to a committee comes in. A committee is a group of volunteers  that focus on a particular issue at hand. They are run as a mini-board, where a  chair is elected, topics are discussed and minutes are reported. They take  those minutes to the board. How many committees an association has and their  responsibilities will vary from property to property, as will the committee  size. Most commonly, the larger the association, the more the amount of  committees the board will create. Ultimately, it’s the board’s responsibility to create the number and type of committees and help to define  their purpose.

Strong, well-organized committees are a boon to a busy board and community  association manager and offer residents an opportunity to get involved in their  community. “The committee structure takes a big burden off the board of directors,” Heit says. “Once the committee has done its due diligence and given thorough consideration  to an issue or matter at hand, then it's up to the board to either approve,  reject or to maybe make minor modifications to the work the committee has done.  The board doesn't have to start from scratch to collect all the background  investigation and research. All that work can be done at a committee level,  thereby saving time at a board meeting for important decisions to be made. ”

Aside from the usual suspects—budget, landscape and maintenance committees—committees can also include a communications committee that shares news and  events with residents, a nominating committee that interviews prospective  residents and a neighborhood watch committee that makes sure the property stays  safe and protected. According to Heit, one of the most important committees an  association can have is a community standards committee.

“You might think of it as the rules committee, but instead of enforcing rules, we  like to ask residents to uphold standards,” Heit says. “These committees look at each and every rule. The community standards committee  will hear the concerns of the residents—what's working, what's not working—and they'll formulate rules in conjunction with the association's attorney to  make sure they are enforceable and they accomplish the tasks the residents or  committee is asking to do,” he says.

Committees not only work to uphold community standards, they also strive to set  them.

“We had one committee that wanted the city to install a ramp for kayaks,” Heit says. “So they formed a committee in the association in order to accomplish that task.  Through a stronger voice, they were able to approach the city planners to go  ahead and include that in the design and master plans for that residential  area. Right now that kayak [ramp] is on the drawing board and is waiting to be  installed.”

We the Committee, People

Just as critical as it is to put the right people on the board of directors, it’s just as important to have the right people on the right committee, although  committee members are volunteers, not elected. So who makes for a great  committee member? “I think the first and foremost thing is a knowledge of the material that they're  responsible for, or the area they're responsible for,” notes Ruth Glickstein, board president of the La Paz Community in Boca Raton. “And secondly, the ability to work with other people. That's a very important  thing.”

Glickstein adds that someone who is in the know and up to date on association  matters is an ideal candidate for a committee member. “You've got to know what's happening,” Glickstein says. “You can't come to a meeting once a month or once every two months and not know  one thing about what's going on.”

While having a strong acumen and relevant experience in your committee topic is  helpful, it isn't completely necessary—you don't have to possess the keen financial insight of Suze Orman to be on the  budget committee.

“It doesn't hurt if somebody has a background in finance, but you know, we don't  look a gift horse in the mouth,” Steven Weil, Ph. D., president of Royale Management Services in Fort  Lauderdale, says. “You know, having a plumber on a budget committee that doesn't know anything  about finance, but understands the old plumbing system in the building isn't a  bad thing. Different people bring different perspectives,” he says.

The size of the committee is extremely important to its success. Experts agree a  committee should have an odd number of members to ensure they aren't deadlocked  when it comes to voting on issues, and should consist of at least 3 members but  no more than 11.

Just like conflicts that can occur among board members and in board meetings,  committees can find themselves in the midst of a conflict too. Committees are  counterproductive when the duties or authorizations are not spelled out. “I think the board needs to have a meeting before they talk about who is on the committee  and [clarify] what the purpose of the committee is,” Weil says. “What responsibilities are we going to give them? How long is it going to last?  And that needs to be before you start appointing people to a committee.”

If the board does not set boundaries for committees, there is a risk of them  becoming more problematic than beneficial, Weil warns. “I've seen runaway committees, with the attitude of: 'We're the budget committee and we're off on our own, and now we're questioning  everything the board is doing,'” Weil says. “I'm a big fan of temporary committees to get a job done and then disband because  the problem is that sometimes, committees want to take over the operation. Make a clear distinction that  an advisory committee is serving in an advisory capacity. The board is still  the decision makers, and they may or may not take the recommendations of the  committee,” he explains.

How often a committee meets also depends on the type of committee it is. “Some committees need more time together than others,” Glickstein says. “For example, pools need constant attention, so people on the pool committee or  the landscape committee, they have to stay involved and they have to be aware  of what's going on because it's a constant thing. It isn't like a roof that may  cause a problem every 10 years. This is an ongoing situation.”

“A welcome committee would meet only when there's a new purchaser or a new tenant  to be screened,” Heit adds. “A social committee should meet more periodically, especially in a larger  community, to plan events throughout the year. A facilities committee should  also meet regularly—at least once a month—to make sure they're on top of the infrastructure of the community. A budget  committee is more seasonal,” he continues. “They would start gathering information six months before the budget is due and  then meet with more frequency as the final numbers and final adjustments are  made before the budget is published to the residents.”

Along with providing added help to boards, committees are also beneficial to  residents in that they promote a collaborative environment, further strengthening community bonds. Heit  encourages all association residents to get involved. “I think the committee structure is a wonderful way for residents to actually get  involved in condominium or HOA activities,” Heit says. “It also provides a way for residents to become familiar with how the board works  and prepares them for membership on the board.”

Lisa Iannucci is a freelance writer and a frequent contributor to The South  Florida Cooperator. Editorial Assistant Enjolie Esteve contributed to this article.