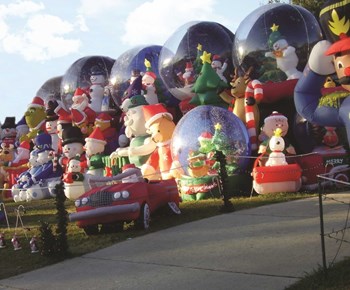 Holiday decorations are an easy way for an association to spread some seasonal cheer and add a cozy, communal vibe to the neighborhood. And they’re a big part of Florida communities: 80 percent of associations choose to decorate, per a recent survey from the Community Association Leadership Lobby. But what was once a practice limited to a couple lights, ornaments and a menorah or two has migrated toward a decorating empire complete with 10-foot tall blow-up Santas, multi-color lights that pulse and twinkle and even moving reindeer and elves, synchronized to holiday music.

While not all associations chose to outfit their buildings with such elaborate décor (or want the super-sized energy bill that comes along with it), navigating the community decorating scene can be tricky at times. A couple of years ago, a woman in Fort Lauderdale faced charges and possible eviction when her condo association demanded she remove a Jewish mezuzah from the exterior of her door. She won the matter (and the Florida legislature passed a law to permit such objects) but her case revealed that decorating can be more complex than just stringing together a bunch of lights—it involves issues of culture, timing, quantity and quality. Before decking the halls, there are a few things boards and residents should consider.

Whether it’s with simple lights or elaborate displays, each community will vary in regards to the quantity of decorations it allows. There are associations that prefer modest touches and others that have full-on contests between neighbors. Regardless of the decorating preferences, guidelines can be found in the governing documents. “Decorating policies will typically identify the permitted and prohibited locations for the décor, specify the type and size of décor that is permitted or prohibited, and with respect to holiday decorations, may even specify the duration of time that they may be placed on the premises, and identify a time period within which they must be taken down after the holiday passes,” explains Kerstin Henze, an attorney at the law firm of Kaye Bender Rembaum in Pompano Beach.

In order to prevent clutter and overload, some associations may be more restrictive in terms of where seasonal fixings can be placed. “The majority of our communities have policies that limit holiday decorations to common areas only,” says Peggy Talerico, operations manager at Consolidated Community Management, Inc. in Tamarac. Such polices may make it easier to establish uniformity in high-rises or communities with multiple buildings, which can enhance curb appeal.

Timing is also key. Walk into any store after Halloween and you’ll already stumble upon aisles loaded with seasonal gear. Fortunately, many associations have rules that limit how long the Rudolphs and elves can reside on your front lawn or balcony, with most permitting introduction after Thanksgiving and removal right after the New Year. Some boards may choose to leave the work in the hands of professionals: “We have a company that installs the lights on the palm trees and it is up to them when to remove,” says Marcy Kravit, general manager of Residence du Cap in Aventura.

Though the holidays typically evoke images of Christmas trees, in today’s multicultural associations, it’s highly probable that residents celebrate Hanukkah, Kwanzaa or choose not to observe at all. Accommodating everyone might be difficult, so experts suggest either keeping the theme neutral or allowing a bit of leeway on the types of décor residents can display. “Associations can balance competing interests over holiday decorations and avoid disputes over holiday decorating by allowing all residents some latitude to express themselves with holiday decorations within reasonable guidelines that protect and enhance property values in the community,” says Henze. “The U.S. Supreme Court has held that a Christmas tree and a Menorah, at least when displayed next to a Christmas tree, are considered non-religious symbols.” Kravit’s properties allow both a tree and menorah at holiday time to address diversity of residents.

Because of the legislation that passed a couple years ago regarding mezuzahs, Jewish residents are able to display them without facing consequences, even if the association’s policy doesn’t explicitly “allow” them. “The Florida Condominium Act in Chapter 718 of the Florida Statutes, prohibits an association from refusing a request of a unit owner for a reasonable accommodation to attach on the mantel or frame of a door a religious object not to exceed 3 inches wide, 6 inches high, and 1.5 inches deep. In essence, this law permits an owner to display a religious symbol on the frame or mantel of the door, but not on the actual door itself,” explains Henze. The statute doesn’t mention the word “mezuzah,” but it alludes to objects with the same dimensions of a traditional mezuzah: 6 inches long, 3 inches wide and 1.5 inches deep.

The capacity of religious expression may also depend on the type of community you reside in. “For the most part, the condominium communities decorate the common areas in neutral colors and very little religious type symbols. Holiday lights are very popular, but trees, crosses and menorahs are never used. HOAs tend to let homeowners decorate as they please,” says Talerico.

Even if a board has clear-cut rules in place regarding holiday enhancements, there will be instances when owners sidestep the rules or disagree with that is in place. In a few situations, Talerico has seen residents take decorating to an extreme just to prove a point. Thankfully, the association has some weight on its side. “In general, if an association has only been permitting displays of non-religious decorations, it will likely have sufficient basis to deny a request from a community resident to decorate with religious holiday symbols,” explains Henze.

If an association is constantly dealing with problems related to seasonal décor, implementing a total ban might be seen as tempting but many courts might consider it unreasonable.

Most residents enjoy holiday displays and prohibiting them could lead them to question their freedom of speech and religion. A better suggestion? “One solution for hopefully fostering community-wide support on decorating guidelines is for the board to survey the community to learn how residents feel about decorations before adopting decorating guidelines and restrictions. To assist the board in developing decorating guidelines, a board may also consider appointing a committee of members to recommend decorating rules. Including members in the rule-making process will likely result in individual issues being addressed, leaving less room for potential conflicts,” advises Henze. A holiday decorating committee could be a better representation of residents’ interests and can decide what kinds of decorations to include, the locations and when to put them up and take them down.

If a board realizes that residents feel strongly about making changes to the rules, it can make amendments. “Generally, documents only require board approval on amendments to rules. However, some documents may require membership approval as well. Assuming the documents require only board approval, unless the documents provide otherwise, under current Florida law, the board may vote on rule amendments concerning common elements/areas decorating at a duly-called board meeting with notice of the meeting posted in a conspicuous location at least 48 hours prior to the meeting, or by a written resolution signed by 100% of the board members in lieu of holding a meeting. If a rule amendment concerns and affects the decorating and use of a unit or parcel, the board must mail it to owners and post conspicuously on community property a copy of the notice of the meeting at which the rule amendment will be considered at least 14 days prior to the meeting,” explains Henze.

Decorating a community for the holidays can be tough, especially with differences in culture and expectations. And while some boards experience residents going a little overboard with lights and trimmings, in general, seasonal enhancements aren’t too painful and have some great benefits for the community as a whole.

“Permitting tasteful decorations can also enhance the aesthetic appeal during the holidays, foster camaraderie among the residents, and promote a festive, holiday spirit within the community,” says Henze.

Maggie Puniewska is a freelance writer and a contributor to The South Florida Cooperator.