Do not show again [X]
By Liam Cusack   2014 August Neighborhoods 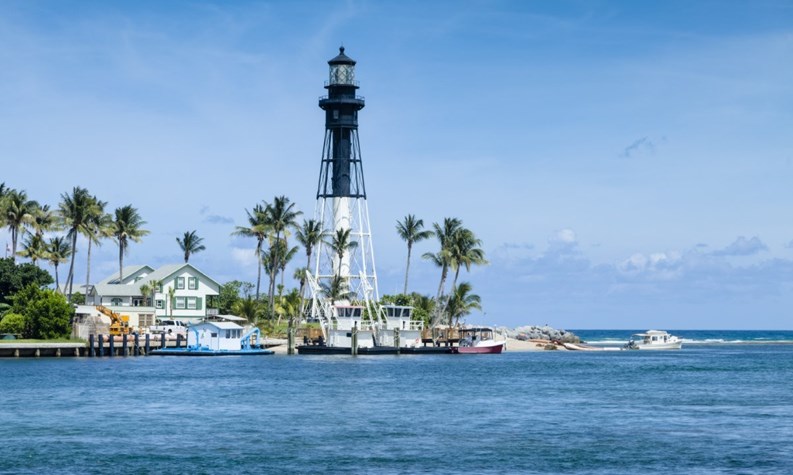 From relaxing on the beach to fine dining and terrific shopping, Pompano Beach has it all. Centrally located between Palm Beach and Miami, Pompano Beach is often called "the Heart of the Gold Coast."

The city is known for its excellent boating and fishing, accentuated by an offshore living coral reef accessible to scuba divers and snorkelers. Anglers and families flock to the 1,000-foot-long municipal fishing pier, beachside playgrounds, grills and picnic tables. More than a dozen professional football players, including the Arizona Cardinals’ cornerback Patrick Peterson, retired linebacker Barry Krauss, the McDougle brothers and the Crockett brothers, grew up in Pompano or currently make their homes there.

Pompano Beach also maintains more than 50 local parks for sports enthusiasts or those who have a penchant for outdoor relaxation. Local attractions and shopping provide myriad entertainment options. Annual special events include a holiday boat parade in December, seafood festival in April, and fishing rodeo in May. The city is home to what is considered one of the finest beaches in Broward County and houses the Hillsboro Lighthouse, one of the last functioning lighthouses in Florida.

Pompano Beach is currently in the middle of a redevelopment process to revitalize its beachfront and historic downtown. The city has also been listed as one of the top real estate markets, being featured in CNN, Money and the Wall Street Journal as one of the country's top vacation home markets. Pompano Beach Airpark, located within the city, is the home of the Goodyear Blimp “Spirit of Innovation.”

There had been scattered settlers in the area from at least the mid-1880s, but the first documented permanent residents of the Pompano area were George Butler and Frank Sheene and their families, who arrived in 1896 as railway employees. The first train arrived in the small Pompano settlement on February 22, 1896. It is said that Sheene gave the community its name after jotting down on his survey of the area the name of the fish he had for dinner. Local legend gives this tale for the origin of the community’s name but whether it is factually true, no one knows.

The coming of the railroad led to development farther west from the coast. In 1906, Pompano became the southernmost settlement in newly created Palm Beach County. That year, the Hillsboro Lighthouse was completed on the beach.

On July 3, 1908, Pompano was the newest municipality incorporated in what was then Dade County. John R. Mizell was elected the first mayor. In 1915, Broward County was established, with a northern boundary at the Hillsboro Canal. Thus, within eight years, Pompano had been in three counties. Pompano Beach experienced significant growth during the Florida land boom of the 1920s.

Following the population boom due to World War II, in 1947 the City of Pompano merged with the newly formed municipality on the beach and became the City of Pompano Beach. In 1950, the population of the city reached 5,682. Like most of southeast Florida, Pompano Beach experienced great growth in the late 20th century as many people moved there from northern parts of the United States. A substantial seasonal population also spends its winters in the area. The city today has over 101,400 residents, but that number increases to over 150,000 with an influx of part time seasonal residents and summertime visitors.

The Ely Educational Museum, Meridian Gallery, and Pompano Beach Art Gallery are also located in the city. Two theaters in the area include Curtain Call Playhouse and Poet Productions

The city of Pompano Beach celebrated its centennial in 2008, making it is the second oldest city in Broward County, and the fifth oldest in all of South Florida. Only Key West, West Palm Beach, Miami and Dania Beach became municipalities earlier than Pompano.

According to the Chamber of Commerce, the city’s economy is based on tourism, light manufacturing, retail, and high technology with 3,000 acres set aside for industrial and commercial development. Pompano Beach is in an ideal location near two international airports, several international seaports, railways and highways with excellent access to the global marketplace. Being part of Broward County gives the town the added advantage of being close to over 2 million people and 50,000 businesses.

Pompano Beach's tax structure is also very attractive. An estimated one-half of general revenue in the state is derived from a 6% sales tax. There is no state income tax, no state property tax, no inventory tax and no corporate franchise tax on capital stock. Pompano Beach enjoys one of the smallest tax rates in the county.

Since tourism is the top industry, for the vacationer, there are approximately 2,000 tourist accommodations and 200 plus restaurants featuring a wide variety of taste-tempting menus. Pompano Beach also offers great golf courses to challenge the skills of the visiting duffer. For tourists who enjoy sport fishing or diving, Pompano is an equally ideal location. There are numerous marinas offering fishing and diving excursions as well as small boat rentals. Most tourists are astonished at the beauty of the only coral reef system in the continental United States. Here you can sit back and relax, along the 3.5 miles of sandy white beach, or you can take a stroll or sit and enjoy the cool breezes and gentle waves of the Atlantic Ocean. Consider visiting Pompano Beach, and you may find a place to stay in a welcoming city that lies in the heart of everything.