Do not show again [X]
By Liam Cusack   2013 August Neighborhoods 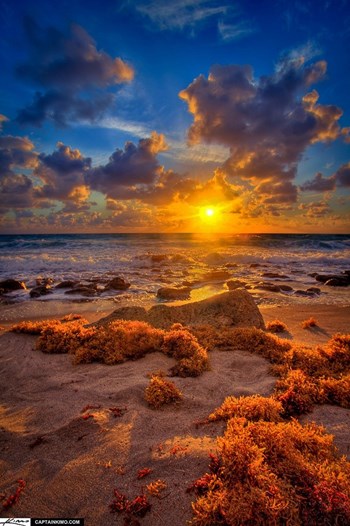 North of Palm Beach, and located less than twenty miles from West Palm Beach Airport, off the Intracoastal Waterway and just off many major highways, lies the community of Jupiter, Florida, with its pristine beaches, parks, playgrounds and shops.

In Jupiter, you’ll find out-of-this-world resorts and many forms of affordable lodging, fine dining establishments and informal eateries and shopping for all tastes and budgets. And let's not forget about the beaches, which have served as retreats for surfers and beachgoers for decades.

Stop by Dubois Park, with more than 1,200 feet of tropical palm-lined beach, as well as playgrounds and picnic pavilions. Carlin Park offers an exercise trail and well-equipped picnic areas. Ocean Cay Park features a playground, showers, pavilions and restrooms. Just across the Intracoastal Waterway is Jupiter Island, a wealthy enclave in Martin County. Blowing Rocks Preserve, which protects the island's habitats, boasts the largest stretch of Anastasia limestone along the Atlantic.

The area where the town now sits was originally named for the Hobe Indian tribe which lived at the mouth of the Loxahatchee River, and whose name is also preserved in the name of nearby Hobe Sound. A mapmaker misunderstood the Spanish spelling "Jobe" of the Indian name "Hobe" and recorded it as "Jove." When the English arrived in 1763, subsequent mapmakers further thought this was the Latin translation of the god Jupiter, and they anglicized the name from Jove to "Jupiter." The Roman god Jupiter (or Zeus in Greek mythology) is the chief Roman god, husband of Juno, and god of light, of the sky and weather, and of the state and its welfare and laws. It inspired a neighboring town to name itself "Juno Beach."

The Spanish exploration of this area of Florida began with Juan Ponce de Leon in 1513. On March 3rd of that year after being removed as Governor of Puerto Rico he sailed to Florida with three ships on a mission seeking gold and, according to some, the rumored 'Fountain of Youth.' Based on several maps drawn years later, likely based on charts by Ponce de Leon, some surmise that one of his landings occurred at the Jupiter Inlet.

The most notable landmark is the Jupiter Inlet Lighthouse, completed in 1860. Made of brick, it was painted red in 1910 due to discoloration caused by humidity. Hurricane Jeanne in 2004 sandblasted the paint from the upper portion of the tower, and the tower was repainted using a potassium silicate mineral coating. The lighthouse is often used as the symbol for the city.

According to Mike Daniel, a Jupiter Farms resident who is researching the early Spanish explorations and plans to write a book on the early history of South Florida, Ponce de Leon may have left a monument to his visit to the inlet, "Somewhere out there, there is a stone cross, probably with an inscription. (It is) the most important artifact you could find."

Fort Jupiter was built in 1838 following a battle with Seminole Indians on the Loxahatchee River. The 9,088-acre Jupiter Military Reservation that was created around it in 1855 included the site of the Jupiter Inlet Lighthouse and the location of the second Fort Jupiter where the Fort Jupiter Post Office was activated from 1855 to 1856, during the Third Seminole War. Because of the difficulty to man or supply the fort, it was closed in 1860.

Jupiter was the northernmost stop on the 7.5-mile “Celestial Railroad” line that had once served as the last link for travelers to Lake Worth. After boating down the Indian River, they would take the train to the head of Lake Worth in Juno where they would once again board a boat for destinations further south. In 1925, the town of Jupiter was incorporated. A year later, a federal highway was completed linking Jupiter and Miami, and a new bridge went up across the Loxahatchee River. This infrastructure addition allowed Jupiter to grow. Following World War II, Jupiter’s population climbed as veterans returning home from the war needed places to live. Air travel also brought many prospective homeowners to Florida, and it soon became a popular place for retirees by the time the 1970s rolled around. This led to a huge building boom in the area.

Today Jupiter remains an extremely popular tourist destination and is home to more than 55,000 residents. Unlike West Palm Beach, Fort Lauderdale or Miami to the south, Jupiter provides a more quiet, natural beachfront lifestyle. This is main reason why many celebrities, sports figures, including many PGA golfers and titans of business choose to call Jupiter home. Some of the more notable residents include Tori Amos, Tiger Woods, Michael Jordan, Celine Dion, Burt Reynolds and Bill Parcells just to name a few. Jupiter is also home to the Miami Marlins and St. Louis Cardinals spring training facilities and Class A minor league affiliates.

With so many condominium and homeowners associations in Jupiter, there are bound to be some disagreements between residents and association boards. But one disagreement became so controversial that it not only made the national news it also was discussed by the President and led to federal law being enacted.

Andres said, "Well, first they said that it was going to cost more to cut the grass around the pole, which is kind of funny. And then they told me that the flagpole was going to take away from the value of the property. And I said, ‘well, then we should be able to take away all the trees around here, because they're the same as the pole.’ And my pole is a portable pole. And the state government says I can do it."

Andres won in court, and was allowed to display his flag and flagpole on the front lawn. In July 2006, President George W. Bush signed the Freedom to Display the American Flag Act of 2005, allowing residents to display the flag on their residential property despite any homeowners’ association rules.

With such natural beauty, warm climate and so many diversions, why not take that trip to Jupiter. You just may decide to plant your own flag here permanently.