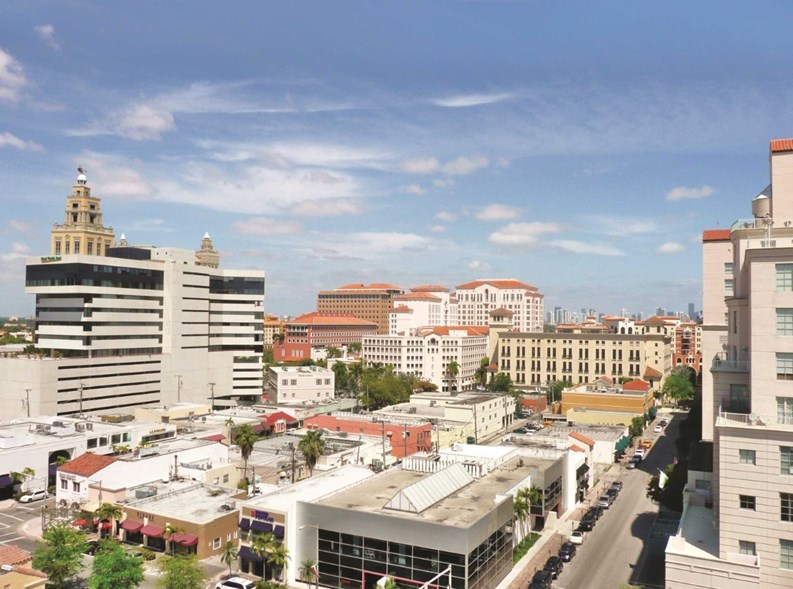 Coral Gables is home to many historic landmarks such as The Biltmore Hotel, The  Alhambra Water Tower, the Venetian Pool and Coral Gables City Hall and The  University of Miami that boasts a student body of more than 15,000. In 2012,  U.S. News and World Report ranked the college number 44 in its Best College  listing.

Located four miles from Miami International airport, southwest of downtown  Miami, Coral Gables was one of the first planned communities, and prefigured  the development of the gated community and the homeowners association. The area  was the brainchild of real estate developer George Edgar Merrick during the  Florida land boom of the 1920s.

Community founder Merrick was born in Springdale, Pennsylvania in 1886 and moved  with his family to Miami in 1898. His father, Reverend Solomon Merrick, a  Congregationalist minister, had purchased one hundred and sixty acres of  undeveloped land which he operated as a plantation, growing avocados, oranges  and grapefruit on land that is now the Granada Golf Course.

In October, 1915 George Merrick was appointed by then governor of Florida, Park  Trammell, to replace F.A. Bryant as the county commissioner in District 1.  Merrick would spend the next 15 months championing the building of roads in  South Florida, including major highways that would later serve to connect his  well-planned community of Coral Gables with the fast growing city of Miami.

During his tenure as County Commissioner Merrick was responsible for numerous  road construction projects in Dade County such as South Dixie Highway (US 1),  the Tamiami Trail across the Everglades, the County Causeway to Miami Beach and  Ingraham Highway (later known as Old Cutler Road) among many others. These  improvements allowed the population of Greater Miami to quadruple from 1915 to  1921.

By 1921, ten years after his father’s death, Merrick had amassed over 3,000 acres of land, more than enough to begin  a massive real estate development project, the largest Florida had ever seen.  Merrick’s plan was to create a unique suburb of the city of Miami, called Coral Gables,  named after the native rock home where he spent his childhood.

Heavily influenced by The City Beautiful Movement, a philosophy of architecture  and urban planning with the intent of introducing beautification and monumental  grandeur to cities, Merrick teamed up with artist Denman Fink, architects H.  George Fink and Phineas Paist and landscape architect Frank Button to create  what would become Coral Gables.

Many buildings were constructed in the Mediterranean Revival style, featuring  all the elements of the City Beautiful Movement right down to the minutest of  details, like city lamp posts.

A few years later in 1925 Merrick donated 600 acres of land and a pledge of $5  million dollars to create the University of Miami. That same year in 1925, the city of Coral Gables was incorporated. In the four  years between its inception and incorporation, seven million dollars of  property was sold, more than six hundred homes were constructed, sixty-five  miles of roadways were built and over eighty miles of sidewalks added.

The following year in January of 1926 the Biltmore Hotel held its grand opening.  The Biltmore Tower was inspired by the Giralda tower of the Cathedral of  Seville, Spain. The 400-room premier resort was designed by Leonard Schultze  and S. Fullerton Weaver and remains an example of Coral Gables trademark  Mediterranean style architecture. When completed it was the tallest building in  Florida, easily surpassing the Freedom Tower in Downtown Miami.

Around the same time Merrick came up with a $75 million dollar plan to build  what was then, the largest home development project in history. His vision was  to erect fourteen villages that consisted of 1,000 residences. The goal of this  joint venture between Merrick, The American Building Company and former Ohio  governor Myers was to attract potential homeowners from the snowy North to the  Florida sunshine.

The dream was washed away with the massive Hurricane of 1926 and the ensuing  Depression hammered a nail in the coffin of South Florida land development.

On September 18, 1926 the Great Miami Hurricane made landfall between South  Miami and Coral Gables. When the category 4 hurricane hit, a 15-foot storm  surge inundated the area, and 125 mph winds were reported on the ground. Most  of the coastal residents had failed to evacuate because of the short warning (a  hurricane warning was issued a mere four hours before the storm made landfall)  and because the city’s population, many who were new to the area, was unaware of the danger a major  hurricane posed.

Days after the hurricane, The University of Miami opened in Coral Gables for its  inaugural semester. The University’s athletic teams were nicknamed the Hurricanes in memory of the catastrophe and  the school adopted an Ibis for its mascot because, according to folklore, an  Ibis is typically the last bird to leave before a hurricane and the first to  return.

World War II breathed new life into Coral Gables as thousands and thousands of  soldiers flooded the area, occupying many unused buildings and The Biltmore  Hotel served as an army hospital. The emergence of the Miracle Mile in the 1950s paved the way for commercial  development in the 1960s and 1970s and beyond. Building height restrictions  were eventually waived and high-rises sprang up drawing large American, Latin  American and Caribbean companies and residents to the area, many of which  remain today.

Christy Smith-Sloman is a staff writer for The South Florida Cooperator and  other publications.