Do not show again [X]
By Keith Loria   2014 December Security 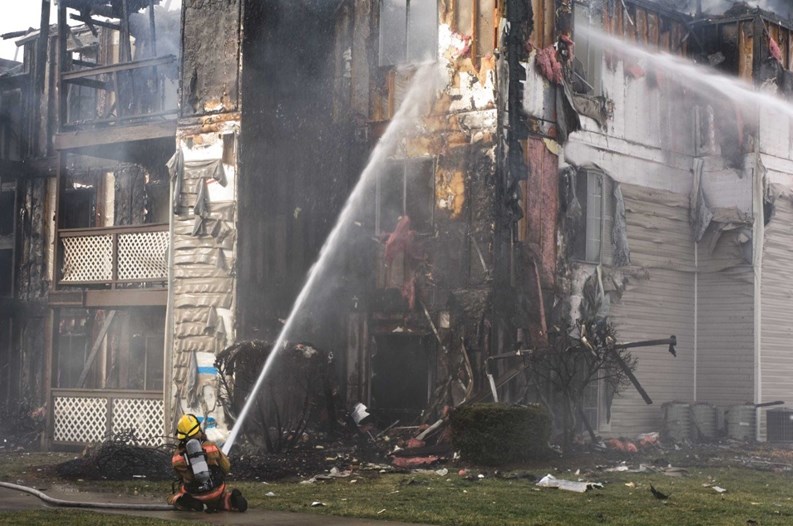 One only needs to watch the news regularly to get a sense of the devastation wrought by fire on a home or community. According to the National Fire Protection Association (NFPA) in 2012 (the most recent year on record) some 97,000 fires broke out in apartment buildings (including condos and HOAs) across the U.S., resulting in nearly 400 deaths nationwide, and over 4,000 civilian injuries—many of them grievous.

What's more, Paul Rouse, a member of the Florida Fire Equipment Dealers Association and 34-year veteran of the fire industry, says that over 12 million unintentional fires go unreported, causing 640,000 injuries annually. Some of those fires happened right here in South Florida—and some of them robbed condo residents of their homes, dreams, and even lives.

According to the NFPA, the top causes for fires in multifamily buildings are cooking-related mishaps, electrical and heating misuse or malfunction, and smoking materials, such as cigarettes and pipes. While these multifamily buildings take great care in their fire prevention programs—adding cutting-edge smoke alarms, mandatory sprinkler systems, and utilizing top-of-the-line flame-resistant building materials, unfortunately, fires still do happen. And whether they’re a small blaze caused by an out-of-control barbeque on a private balcony or four-alarm infernos the result of electrical problems, the main concern of anyone in the building is to get themselves and their families and neighbors out safely.

Bill Worrall, vice president of FirstService Residential in Miami says his firm has a long list of items that building staff and management need to understand when it comes to fire safety. These include the plans and schematics for the building overall, as well as both electrical and plumbing systems; all should be on file in hard and electronic format. “All staff and management should review emergency plans and incorporate them into the community’s emergency preparedness plans,” he says. “This should include evacuation routes, notifications, etc., and this plan should be communicated to all residents in the building on a regular, recurring basis.”

With the recession-related reduction in fire fighter staff in Miami and the surrounding cities, stopping fires before they start is more of a concern than ever, says Worrall. “First, we make sure our rules and regulations comply with local fire codes, i.e., no barbecues on the balcony. Second, we keep our building inspector’s approval on file in the management office,” he says. “Third, we communicate to our residents of any changes to the local laws and changes to our building’s plans on an annual basis. In an emergency we believe it is always better to be prepared.”

Developers spend millions building beautiful condo communities with top-of-the-line kitchens and grills but fail to consider that distraction and forgetfulness can pose significant dangers to the residents who cook. According to the NFPA, 43 percent of people who have died in cooking-related fires were asleep at the time.

“We increase cooking safety by requiring that all new condo developments, at the very least, install a range top suppression system in both private homes and community kitchens,” Rouse says. “States should require mandatory range top suppression equipment in new buildings or remodels just like sprinklers and earthquake shut-off valves are.”

Janet A. Washburn, senior plans examiner for the City of Hollywood Fire Rescue and Beach Safety in Hollywood says building staff and management should understand simple precautions to take when practicing good fire prevention. “It’s important that each condominium have a written, effective housekeeping program in place, and that all staff are aware of it,” she says. “Good housekeeping means minimizing the quantity of unstored, exposed combustibles, ensuring that emergency exits are not blocked, and that fire protection equipment is checked and maintained regularly.”

Additionally, staff should be familiar with the fire protection features of their building community and who maintains them. “In some instances, maintenance staff will have a role in performing daily, weekly and monthly routine checks of that equipment while contractors will perform the annual inspections and any repairs if necessary,” Washburn says.

When it comes to residents, Washburn says they should be familiar with at least two means of egress in the event of an emergency. They should also perform monthly checks of their smoke alarms, as well as changing the batteries twice a year at daylight savings time. “Residents should also know where the closest fire extinguisher is on their floor,” she says. “They should also practice good fire prevention practices of not smoking in bed, refrain from utilizing unattended candles and never leave unattended cooking items on the stove or oven.”

Information, and a Watchful Eye

Everyone agrees that good communication with residents is a crucial feature of effective fire prevention. Washburn says management could include this information in a monthly email newsletter, meetings, bulletin boards or condominium documents establishing fire prevention procedures to follow—any way to get the word out to one and all.

For example, Worrall says that his firm communicates a building's prevention/evacuation plan to the residents annually, and also provides the plan to all new residents as they move in as part of the orientation process. Additionally, Worrall says it is prudent for communities to maintain a roster of residents who may be in need of physical assistance during such emergencies/evacuations.

Cooperation with municipal fire prevention pros is key as well, adds Washburn. It's important to work with the local Fire Marshal’s office for assistance or hire a professional consultant trained in fire evacuation planning to assess and fine-tune your community's protocols if necessary. In most cases, she says, the local Fire Marshal Office will be happy to evaluate a plan after it’s developed and make suggestions appropriate to that building community.

And this isn't a one-time-only thing; it's not uncommon for general contractors to alter or otherwise modify life safety components (like sprinkler heads and speakers, for example) in the course of doing remodeling or construction work. This may not only compromise the safety within that unit, but it might also cause trouble with the main system. So it's important to not only make sure alteration agreements cover life safety systems, but that they're re-checked both during and after a project to make sure they've not been compromised. “To avoid any issues in the future, our management ensures that all life safety items are included within the communities remodeling approval process,” Worrall says. “We think good communication is the key to successfully navigating any emergency.”

The state of Florida has its own fire code called the Florida Fire Prevention Code, which encompasses National Fire Protection Association (NFPA) codes, and dictate annual testing on the fire alarm, fire sprinkler system, fire pump, fire extinguishers and emergency generators in multifamily buildings and developments. These annual tests must be performed by licensed contractors.

In addition, the code also stipulates that emergency instructions 'shall be provided annually to each dwelling unit to indicate the location of alarms, egress paths, and actions to be taken, both in response to a fire in the dwelling unit and in response to the sounding of the alarm systems.' In some cases, building maintenance may be responsible for weekly checks for some of those items.

It’s up to the property management company to keep up with changing legislation on an annual basis. “You must be aware of the age of your community and how new legislation may require investments in new infrastructure to ensure all buildings are up to code. This is especially true of older developments,” Worrall says. “Newer communities are typically built to current codes, but it’s still important to conduct an annual review of relevant legislative changes.”

In Broward County, all fire inspectors are certified firefighters—which brings another important layer of experience and knowledge when evaluating a fire plan.

“Because they responded to actual building fires during their career, they have firsthand working knowledge of the design idiosyncrasies specific to such buildings,” Washburn says. “During the annual fire inspection, the inspector can evaluate the condominium communication and evacuation plan and make suggestions as necessary.”

According to Worrall, inspections are usually done annually. In addition, your life safety contractor should have regularly scheduled visits to the building community to ensure no problems arise between inspections. “Everyone should know the schedule for annual inspection by the local fire authorities and know the basic elements of the inspection,” he says. “Our motto is to be prepared, as opposed to surprised, when the inspector arrives.”

Worrall says the safety system contractor should be bid out on a regular basis, just as with any other service provider.

The procedure for evacuation is similar in almost all condos and HOAs. Once an alarm sounds, the evacuation of residents should begin immediately. All buildings should post the evacuation route within the building, all stairwells and exit signs should remain lit, and elevators should not operate during a fire evacuation. All strobes, alarms, annunciators and sprinklers should be operational throughout the building and within all units.

“For us, management announces a mandatory evacuation over the annunciator system and ensures first responders have received the signal and are on their way,” Worrall says. “We ensure any exterior gate arms or road access gate barriers are up, and facilitate access for emergency responders into the building, which also includes the front door to the building.”

“Our management team has an emergency communication plan in place to communicate with all residents subsequent to evacuation,” Worrall says. “All FirstService residents also have access to FSRConnect, the industry’s first and only 24/7 integrated customer service platform, that serves as a communication channel to give residents access to immediate updates on the status of their homes in the wake of a fire, natural disaster or other emergency.”

According to prevention and firefighting pros, management should then get out of the way and let emergency responders do their work, evacuate anyone remaining in the building, identify the fire and extinguish it.

A good fire prevention plan should include: procedures for reporting of emergencies, occupant and staff response to emergencies, evacuation procedures appropriate to the building, its occupancy and emergency, appropriateness of the use of elevators, type, location and coverage of building fire protection systems, names and phone numbers of persons responsible for maintaining the fire protection equipment, and special instructions for any mobility-impaired resident.

Keith Loria is a freelance writer and a frequent contributor to The South Florida Cooperator.