Do not show again [X]
By Liam Cusack   2012 December Neighborhoods 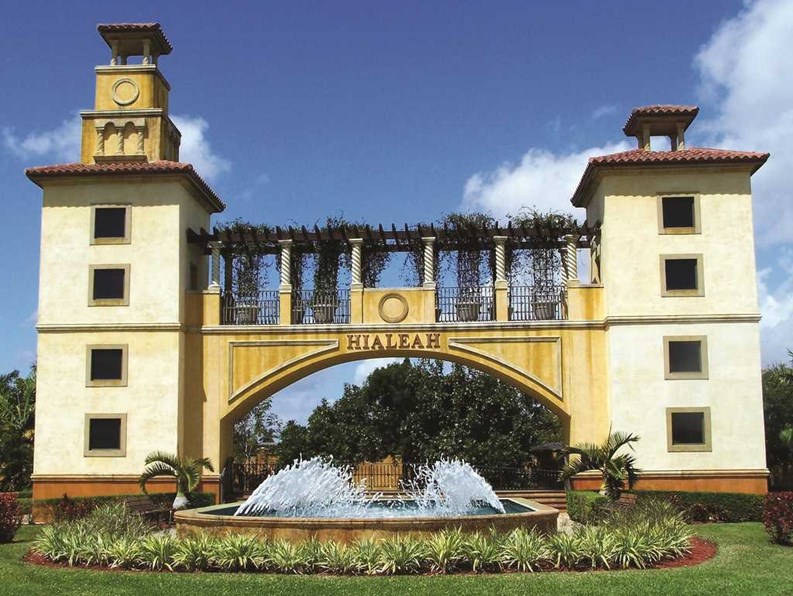 Glenn Curtis the aviation pioneer was quoted as saying, “All roads lead to Hialeah.”

Centuries prior to this quote the Seminole and the Muskogee were already inhabiting the area.

In fact, the city's name is most commonly attributed to Muskogee origin, “Haiyakpo” (prairie) and “hili” (pretty) combining in “Hialeah” to mean pretty prairie. Alternatively, the word is of Seminole origin meaning “Upland Prairie.” The name is appropriate since the city is located upon a large prairie between Biscayne Bay and the Everglades.

Unlike many other communities in Miami-Dade county which grew out of the post World War II boom, Hialeah has been a booming community since the early 20th century.

In the early "Roaring '20s," Hialeah was a major entertainment destination among the elite at the time. During the decade millionaires, film stars, politicians and athletes flocked to Hialeah for its exciting entertainment and gambling options. Sporting included the Spanish sport of jai-alai and greyhound racing.

The natural and as yet unspoiled beauty of Hialeah became a magnet for the film industry, still primarily based on the East Coast. Directors such as D.W. Griffith chose to make many feature films in the area. Hialeah was the home of the Miami Movie Studios, which proved to be extremely successful since the climate made year-round filming possible. Among the many films produced in Hialeah, D.W. Griffith's The White Rose, is among the most well-known.

Hialeah was incorporated in 1925 and in the years since its incorporation Hialeah was frequently in the news for many historical events which took place there, and celebrities that frequented the city. 1925 saw the opening of the Hialeah Park Race Track, which was nicknamed the "Grand Dame." This horse race track received more coverage in the Miami media than any other sporting event in the history of Miami up to that time. The beauty of the park with its majestic Mediterranean style architecture along with the excitement and lure of horse racing brought visitors from around the nation and the world to Hialeah. The park was considered one of the most grand of thoroughbred horse racing parks with its majestic Mediterranean style architecture and was considered the Jewel of Hialeah at the time. In addition to attracting millions of tourists, the race track also drew a who's-who list of celebrities. Some of the names known to come to the track to place a wager include the Kennedy family, Harry Truman, General Omar Bradley, Winston Churchill, and J.P. Morgan. The Hialeah Park Race Track also holds the dual distinction of being an Audubon Bird Sanctuary due to its famous pink flamingos and being listed on the National Register of Historic Places.

Hialeah stepped into the history books when the famous aviatrix Amelia Earhart set off from Hialeah on her ill-fated attempt to fly around the world in 1937. Earhart said her final good-byes to her husband and her fans in Hialeah.

While Hialeah was once envisioned as a playground for the elite, Cuban exiles, fleeing Fidel Castro's 1959 revolution as well as World War II veterans and city planners transformed the city into a working-class community. Hialeah historian and Princeton University Professor Patricia Fernandez-Kelly explained "It became an affordable Eden." She further describes the city as "...a place where different groups have left their imprint while trying to create a sample of what life should be like." Several waves of Cuban exiles, starting after The Cuban Revolution in 1959 and continuing through to the Freedom Flights from 1965–1973, the Mariel Boatlift in 1980, and the Balseros or boat people of the late 1990s, created what at least one expert has considered the most economically successful immigrant enclave in U.S. history as Hialeah is the only American industrial city that continues to grow.

From a population of 1,500 in 1925, Hialeah has grown at a rate faster than most of the ten largest cities in the State of Florida since the 1960s and holds the rank of Florida’s fifth-largest city, with more than 224,000 residents. The city is also one of the largest employers in Dade County. Predominantly Hispanic, Hialeah residents are characterized as having assimilated their cultural heritage and traditions into a hard-working and diverse community proud of its ethnicity and family oriented neighborhoods.

Hialeah has the second highest percentage of Cuban and Cuban American residents of any city in the country. Hialeah is also the densest American city in terms of population not to feature a skyscraper.

Hialeah is served by the Miami Metrorail at Okeechobee, Hialeah, and Tri-Rail/Metrorail Transfer stations. The Okeechobee and Hialeah stations serve primarily as park-and-ride commuter stations to commuters and residents going into the inner city Miami, and Tri-Rail station to Miami International Airport and north to West Palm Beach.

The City of Hialeah is a significant commercial center in Miami-Dade County. The city is host to national retailers such as Starbucks, Target, Best Buy, Kohl's, Walmart, Lowe's, The Home Depot as well as homegrown business such as Navarro and Sedano's.

Hialeah is also home to vibrant community of mom and pop stores which actively and successfully compete against national name brand retailers, outfitters, and franchises. In order to remain competitive national businesses have altered their traditional business strategy to meet the demands of the local community. Publix supermarkets opened a Publix Sabor along one of the city's main streets which caters exclusively to Latin American and Hispanic clientele.

Moreover, while most of the manufacturing and cloth industry that made Hialeah an industrial city in the 1970s-1980s have disappeared, new electronics and technology businesses have reinvigorated the local economy.

Westland Mall also known as Westfield Westland provides residents with over 100 stores and several eateries. Macy's, J.C. Penney, and Sears are the main anchor stores located at Westland Mall. Visitors can dine at Fuddrucker's, Chili's, Manchu Wok, McDonald's, and Edy's among other eateries.

It does seem that Glenn Curtis was right when he said that all roads lead to Hialeah. Hialeah has so much going for it, it just might be the right community to build a life.

Liam P. Cusack is the associate editor of The South Florida Cooperator.