Do not show again [X]
By Liam Cusack   2011 September Neighborhoods 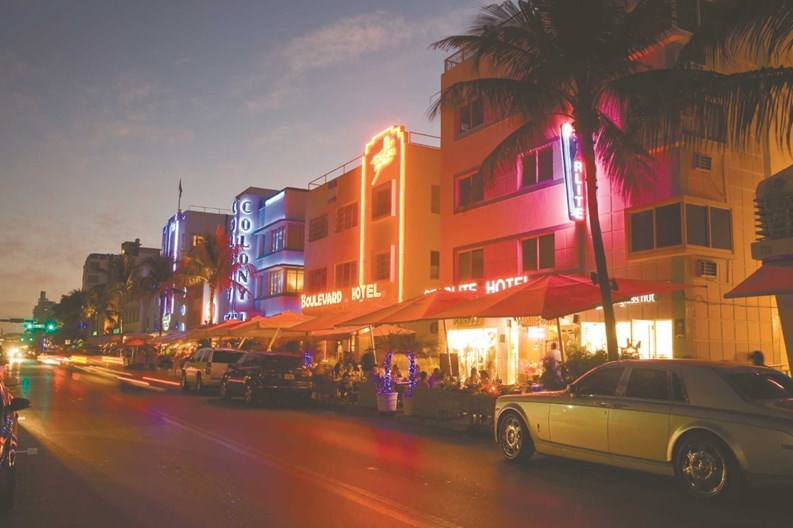 Miami Beach has been called the “American Riviera,” “America's Playground” and the “Billion Dollar Sandbar.” Rising along the Atlantic Ocean on a barrier island, Miami Beach is separated from the city of Miami by Biscayne Bay. The city of Miami Beach has been one of the country's pre-eminent beach resorts since its incorporation in 1915. The sun, surf and legendary party atmosphere has become part of the American diaspora.

The Tequesta Indians were the first known settlers in this region and were able to fend off European settlers until the 1800's. Once settlers staked their claim, Miami Beach began as a 165-acre plot of land intended for the cultivation and harvest of coconuts. New Jersey Quakers, Henry and Charles Lum (the first snowbirds?) purchased the land from the federal government in 1870 for 25 cents an acre. Eventually, their coconut venture floundered and failed. The land was then sold to John S. Collins and Thomas Pancoast, who were also from New Jersey.

In 1913, John Collins and Carl Fisher became partners. Fisher had made his fortune from his invention and later sale of the Presto-o-Lite Corporation and the Indianapolis Motor Speedway. He embarked on an agriculture venture on the beachfront land but much of it was a marshy wasteland. He then envisioned how to develop the mangrove barrier island into an oceanfront jewel and, along with the Army Corps of Engineers, dredged the thick mangroves into a man-made island paradise, known today as Miami Beach.

The city of Miami across the Biscayne Bay was already bustling with life and many entrepreneurs recognized the potential of Miami Beach as a residential and hotel boom-town. Fisher had a developer’s vision and loaned Collins the money he needed to complete the first bridge from Miami to Miami Beach in 1913. The bridge was, at the time, the longest wooden wagon bridge in the world. This milestone would be the catalyst for the 1915 incorporation of Miami Beach as a city. Various restaurants and hotels opened its doors to customers, including the legendary “Joe’s Stone Crabs” restaurant and the first hotel—The W. J. Brown.

The great boom of the 1920’s would see enormous growth and mansions erected over a three-mile stretch of land known as the “Millionaire’s Row.” During the Depression, groups from the northeast would build many small hotels along lower Collins Avenue and Ocean Drive, which would help bring the area out of the Depression. During World War II, Miami Beach became a major training center for the U.S. Army.

When Fidel Castro took over Cuba in 1959, the revolution radically changed South Florida as half a million Cubans poured into the area. A drastic change of demographics and culture produced a reborn Miami Beach; where as per the 2000 Census, 56% of its residents are foreign born and Hispanics rank as the majority comprising 53% the population. The 1980’s and 1990’s brought a massive infusion of investment capital and development.

The city has seen two world wars, the elegance and extravaganza of the 1920’s golden age, and a recent rebirth as a cultural hot spot. The most famous neighborhood is of course South Beach known simply as SoBe. The strip of beach is one of the most popular areas in Miami Beach. This wasn't always the case. From the mid-1960's through the '80's, SoBe was suffering from urban blight. Many of the Art Deco gems that have become icons of the city were vacant and the city had an extremely high crime rate. Miami Beach had become synonymous with retirees and urban decay.

Thanks to the popularity of the film Scarface and the TV show Miami Vice, Miami Beach began to become popular again. As the economic and social decline began to erode, an influx of gay men and lesbians began to move to SoBe in the 1980's and '90's. These cultural phenomena, demographic changes and the economic boom of the 1980's helped to energize the renaissance.

The city has become an arts mecca as well. Each December, the City of Miami Beach hosts Art Basel Miami Beach, one of the largest art shows in the United States. Art Basel Miami Beach, the sister event to the Art Basel event held each June in Basel, Switzerland, combines an international selection of top galleries with a program of special exhibitions, parties and crossover events featuring music, film, architecture and design. Exhibition sites are located in the city's Art Deco District, and ancillary events are scattered throughout the greater Miami metropolitan area.

Miami Beach is an incredibly diverse community with the 2010 US Census showing that 87,779 people resided in the city. Nearly half of the population, 49.8% are of Hispanic origin; 44.3% of the residents are Caucasian; 2.0% are African-American; 1.3% are of Asian descent; while the remaining population is made up of two or more races; Other race alone; or Native American and Pacific Islander. The estimated median household income, as of 2009 was $44,252.

Miami Beach has been less affected by the housing crisis than other cities and towns in Florida. Many towns have been virtually decimated by foreclosures and lost property value. As of 2009 the average price for a condo in Miami Beach was $318,000, which is still far greater than the $138,700 median prices that condos were selling for in 2000.

Miami Beach enters the first half of the 21st century with a winning recipe for continued success. Beautiful beaches; a thriving cultural community; respect for its history; award winning architecture; a solid economy and housing market; and above all else, the tropical Atlantic caressing the powdery white sands. Henry and Charles Lum would never recognize what became of their coconut farm